Sandy Creek Cricket Club has a strong history dating back to the 1932/33 season, when the club joined the Gawler and District Cricket Association in the A2 Grade. The club's first game for premiership points was on 29th October 1932 at home against Lyndoch. Although they lost comfortably, this was the birth of a strong and proud club that now boasts 4 senior men's teams, a women's team and 7 junior teams.

We were one of the foundation clubs for the Para Districts Cricket Association in 1958/59, debuting against Elizabeth South.

After 51 seasons in the PDCA, Sandy Creek switched to the Barossa and Light Cricket Association for the 2009/10 season, where we still play today.

Listed below are miscellaneous milestones and highlights from the club's history. 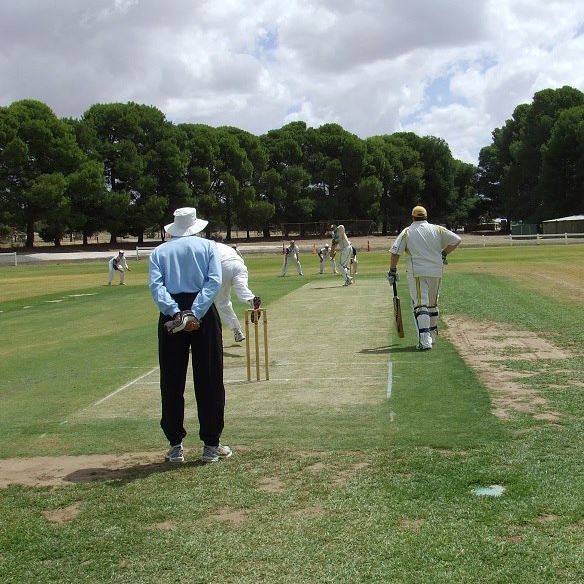 A big moment in the history of the Sandy Creek Cricket Club was the installation of a turf pitch in 2009/10. With curator assistance from SACA experts in the early days, Sandy Creek now boasts one of the best turf pitches in the competition thanks largely to the magnificent efforts of Rooey Roberts (with assistance
Read More 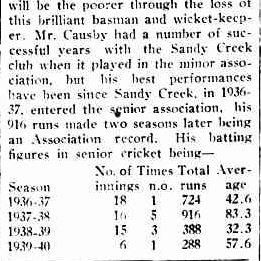 Although he became better known for his run scoring feats in later years while playing for Gawler Central, Arthur “Snow” Causby was Sandy Creek’s first great cricketer. A fast scoring opening batsman and a wicket keeper who stood up to the stumps to even the quick bowlers, Snow Causby was the main player behind Sandy
Read More 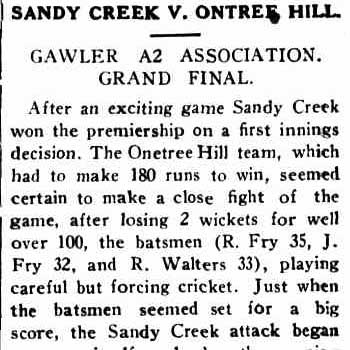 Sandy Creek won their first premiership in their third season, with a victory over One Tree Hill in the Gawler and District A2 Grand Final of 1934/35. Defending 188, thanks largely to 57 from opener Snow Causby backed by a wagging tail, Sandy Creek ripped through the lower half of One Tree Hill’s batting to
Read More 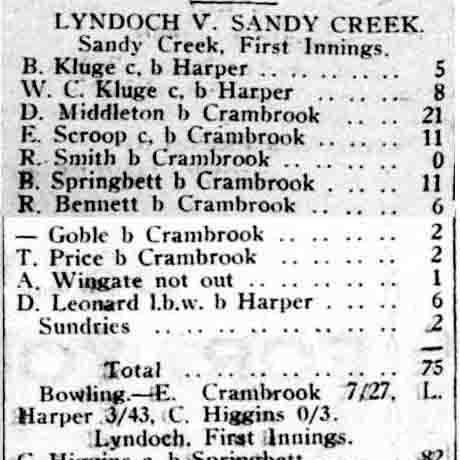 Sandy Creek’s first game for premiership points was on Saturday 29th October 1932, at the commencement of the 1932/33 season. Debuting in the A2 division of the Gawler and District Cricket Association, Sandy Creek hosted Lyndoch but were no match whatsoever for their opponents. After dismissing Sandy Creek for just 75 runs, Lyndoch strolled to
Read More
The Sandy Creek Cricket Club was officially opened on Saturday January 23rd 1932, after a fundraising concert the Saturday before. See below for an article from the Gawler Bunyip at the time, taken from http://trove.nla.gov.au/newspaper/article/96682343
Read More 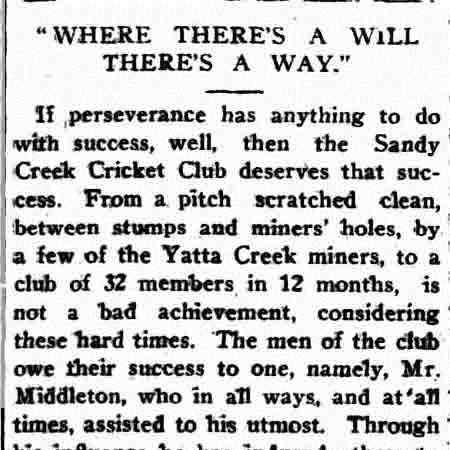 The below article appeared in The Gawler Bunyip on January 15th 1932, describing the efforts in creating an oval for the Sandy Creek Cricket Club. See http://trove.nla.gov.au/newspaper/article/96680324 for the original scan.
Read More