Skip to content
HomeClubYouth, Youth and the Fountain of Youth 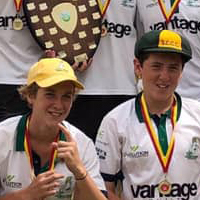 With multiple junior premierships in the last 5 years, it comes as little surprise that Sandy Creek’s A-Grade currently features some of the best young cricketers in the Barossa.

Current Cockatoo juniors Will O’Brien (U15 and U17), Riley Horsburgh (U17), Adrian Pullman (U17) and Harry Maher (U15) have all featured in the A-Grade this year and acquitted themselves well at the top level.

Other A-Grade players under the age of 21 this year include Vice Captain Daniel Koch, Riley Robinson, Cooper Zobel and Brayden Fisher, with only Fisher playing regular A-Grade cricket for Sandy Creek last year.

With 3 and a half games remaining, the Cockies are clinging to fourth position in the A1s and hoping for a third consecutive finals series, which is a great credit to the youth policy of coach Stevie “Wonder” Hands over the last couple of seasons. Handsy was recently quoted in the Barossa Herald as saying “We are a very young team that is starting to play together more as a team, but being somewhat inexperienced we must experience some ups and downs.” Indeed. That almost reads like it could be an actual quote.

At the other end of the age spectrum, despite being older than Will, Riley and Harry combined, 46 year old stalwart Corey Roberts has clearly been drinking from the fountain of youth and currently leads the batting trophy with 311 runs @ 44.43.