HomeNetballSandy Creek Netball off to a flying start

Written by Jack Hudson for The Bunyip newspaper, May 16 2018. 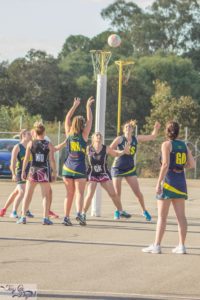 Despite being in its infancy, Sandy Creek Netball Club has taken the Gawler & District Netball Association by storm in its debut season and currently sits undefeated atop the A-Grade ladder.
The Cockatoos have dominated, beating Xavier Saints by 36 goals in their inaugural game, Virginia by 27 in round two, and then St George’s by seven goals in round three.
However, despite the positive start Sandy Creek coach Scott Hill isn’t getting ahead of himself.
“It has been challenging, the reason being that a lot of the girls haven’t played together before,” he said.
“It took them a while to gel, but the competition is a lot more competitive than what the scores are reflecting.
“I think the team cohesion and the goal shooting percentage of the girls has certainly attributed to where we are.
“The pressure throughout by the mid-courters on the ball carriers (has been key) as well.” 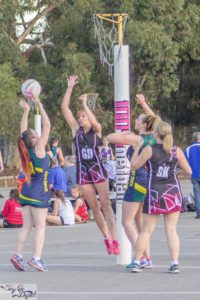 Hill added that a number of his players have worked well together in such a short time frame.
“I’d say Alyssa Wilson, our goal attack, she has a good combo with Amber Rogers, who is our goal shooter,” he said.
“The mid-court of Brooke Barnes and Lauri Catallano is the main driver behind supplying the shooters.
“The glaring difference is that no one player is standing out for the team this year, we go a players’ vote at the end of each game, and each week we’ve had a different player.
“It shows the evenness of the contribution across the court.”
Sandy Creek will take on United this week, which will complete the first G&DNA fixture loop, and Hill said he’s learned plenty from his side’s first games.
“I’ve viewed that there is some work to be done against Virginia and St George’s, they’ll be out stiffest competition this year,” he said.
“Virginia is still expecting players back, which will strengthen it, while St George’s was a fiery encounter, but played in the right spirit.”